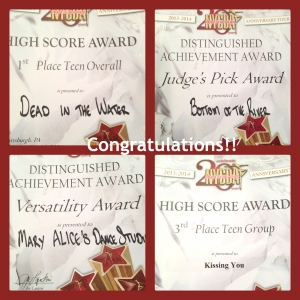 We had the best weekend! Our girls were beautiful and did an amazing job in the classes and on stage! Our studio was given the "Versatility Award". That award goes to the studio that shows talent in all genres, including tap, jazz, lyrical and contemporary. Kennedy was awarded the Steps on Broadway Scholarship for their summer intensive. We were also recognized for Outstanding Choreography for AJ's lyrical, Ali's tap and Julie's contemporary. The girls were given awards for their technique, execution and costumes.

Our solo's did great as well. Nicole placed 4th overall, receiving a platinum award. Rachel also recieved a platinum for her contemporary solo and Claire recieved Gold for her Musical Theater!

All of our groups placed in the top ten overall. Jazz placed 8th Overall, Lyrical placed 3rd Overall, Tap placed 2nd Overall and Contemporary placed 1st Overall. Julie's Dead in the Water recieved the Critic's Choice and Ali's Bottom of the River was named Judge's Pick. These were chosen from 200 plus dances. Our tap was also invited to perform at the DC Tap Fest in their professional showcase. This was an additional honor we were not expecting, so thank you Chole Arnold for that.